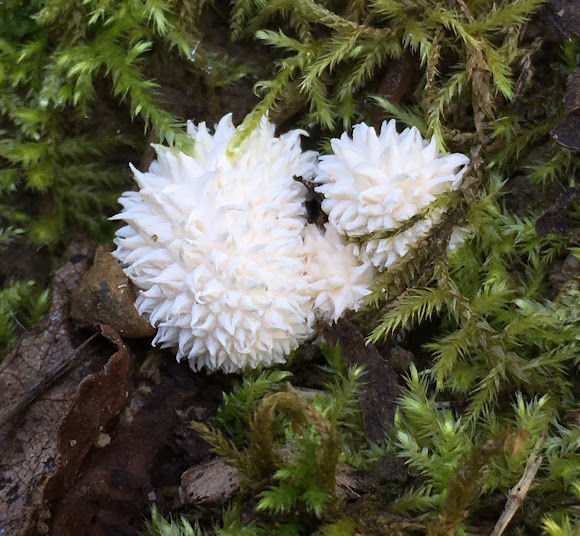 Lycoperdon echinatum, commonly known as the spiny puffball or the spring puffball, is a type of puffball mushroom in the genus Lycoperdon. The saprobic species has been found in Africa, Europe, Central America, and North America, where it grows on soil in deciduous woods, glades, and pastures. It has been proposed that North American specimens be considered a separate species, Lycoperdon americanum, but this suggestion has not been followed by most authors. Molecular analysis indicates that L. echinatum is closely related to the puffball genus Handkea. The fruit bodies of L. echinatum are 2–4 cm (0.8–1.6 in) wide by 2–3.5 cm (0.8–1.4 in) tall, supported by a small base, and densely covered with spines that are up to 0.6 cm (0.2 in) long. The spines can fall off in maturity, leaving a net-like pattern of scars on the underlying surface. Initially white in color, the puffballs turn a dark brown as they mature, at the same time changing from nearly round to somewhat flattened. Young specimens of L. echinatum resemble another edible spiny puffball, Lycoperdon pulcherrimum, but the latter species does not turn brown as it ages. The fruit bodies are edible when young, when the interior is white and firm and before it has turned into a powdery brown mass of spores. Laboratory tests have shown that extracts of the fruit bodies can inhibit the growth of several bacteria that are pathogenic to humans.

Growing in my yard, among some moss. Small - the largest section was maybe an inch wide.