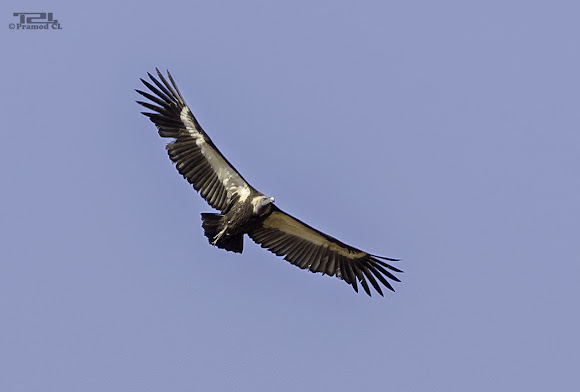 The white-rumped vulture is an Old World vulture closely related to the European griffon vulture. At one time it was believed to be closer to the white-backed vulture of Africa and was known as the Oriental white-backed vulture. The white-rumped vulture is a typical, medium-sized vulture, with an unfeathered head and neck, very broad wings, and short tail feathers. It is much smaller than the Eurasian Griffon. It has a white neck ruff. The adult's whitish back, rump, and underwing coverts contrast with the otherwise dark plumage. The body is black and the secondaries are silvery grey. The head is tinged in pink and bill is silvery with dark ceres. The nostril openings are slit-like. Juveniles are largely dark and take about four or five years to acquire the adult plumage. In flight, the adults show a dark leading edge of the wing and has a white wing-lining on the underside. The undertail coverts are black