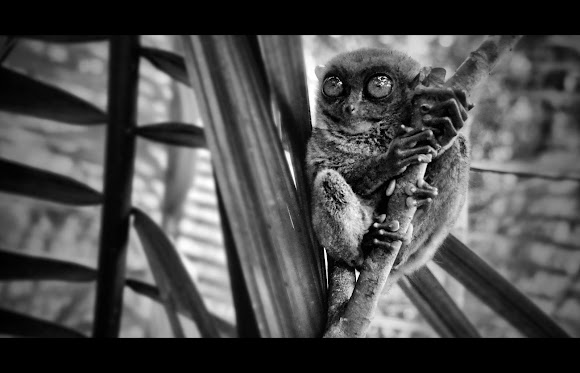 known locally as mawmag in Cebuano/Visayans and mamag in Luzon, is a species of tarsier endemic to the Philippines. It is found in the southeastern part of the archipelago, particularly on the islands of Bohol, Samar, Leyte and Mindanao. It is a member of the approximately 45-million-year-old family Tarsiidae, whose name is derived from its elongated "tarsus" or ankle bone. Formerly a member of the genus Tarsius, it is now listed as the only member of the genus Carlito, a new genus named after the conservationist Carlito Pizarras. Its geographic range also includes Maripipi Island, Siargao Island, Basilan Island and Dinagat Island. Tarsiers have also been reported in Sarangani, although they may be different subspecies. It was introduced to Western biologists during the 18th century.

The Philippine tarsier's habitat is the second-growth, secondary forest, and primary forest from sea level to 700 m (2,300 ft). Its habitat also includes tropical rainforest with dense vegetation and trees that offer it protection such as tall grasses, bushes, and bamboo shoots. It prefers dense, low-level vegetation in secondary forests, with perching sites averaging 2 m above the ground.

Survival in captivity Tarsiers in the Philippines have been sought out as pets or sold for trade, despite their low survival rate outside of their natural habitat, where they feed on live insects. Displays by private people in Loboc, Bohol tend to diminish the lives of tarsiers. Further, some feel that the display of captive tarsiers might encourage tourists to acquire them illegally as pets. Tarsiers do not do well in captivity. Life expectancy decreases by 2 to 12 years (if taken from the wild), as compared to the 24 years the tarsier can live to in the wild. The tarsier can develop sore eyes, which is an indication of a poor diet. Also, the lighting usually used in captivity can cause long-lasting damage to the eyes. Another danger of captivity is the creature's tendency to commit suicide. Because the tarsier is often shy and nervous, many activities associated with captivity (such as camera flashes, being touched, and being kept in an enclosure) stresses the animal. Such stress leads to the tarsier hitting its head against objects, thus killing it because of its thin skull. Impact on human beings No negative impact is known of the Philippine tarsier on humans, as long as it is in its native environment. However, when kept as pets, the species may spread worms and other parasites to its human owners.

Ni Norman Celis! Any information or color image to go with this spotting? Thanks in advance!