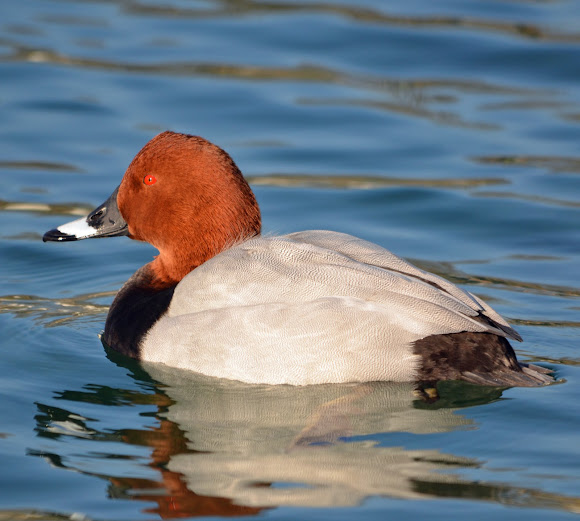 The Common Pochard is a rare breeder but common winter visitor to Switzerland. The adult male seen here is distinctive with his long dark bill with a grey band, red head and neck, black breast, red eyes and grey back. Some of our winter visitors in Switzerland come from the remotest regions of Siberia.

The shores of a large central European lake.

These ducks form large flocks in winter, often mixed with other diving ducks such as tufted ducks. This one was the only obvious one of his species spotted in the company of a large number of tufted ducks. I may have missed females.

I thought it might be the case Desmond, but I could not be sure you hadn't traveled to these shores :-)

Actually I haven't seen these before I have only seen a redhead.

Beautiful capture Danièle,great eyes :-) congrats and thanks for sharing

Thanks Desmond! I was actually not so close and I caught him at the long end of my telelens... He kept his distance to the shore and quickly swam away.

I would really want to see one of those close up, Iv'e only seen them from about 30 feet away :)