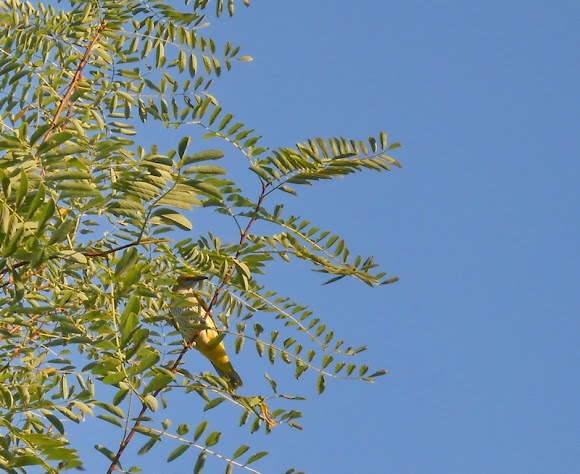 The name "oriole" was first used in the 18th century and is an adaptation of the scientific Latin genus name, which is derived from the Classical Latin "aureolus" meaning golden. Various forms of "oriole" have existed in Roman languages since the 12th and 13th centuries. They feed on insects and fruit. They build neat nests in tree forks and lay 3-6 eggs. Their call is a screech like a jay, but the song is a beautiful fluting weela-wee-ooo or or-iii-ole, unmistakable once heard. (Wikipedia)

The Eurasian Golden Oriole or simply Golden Oriole (Oriolus oriolus) is the only member of the oriole family of passerine birds breeding in northern hemisphere temperate regions. It is a summer migrant in Europe and western Asia and spends the winter season in the central and southern Africa. (Wikipedia)

I noticed three Oriols. They were playing in some trees. They are very, very shy, you hardly can take a photo of them.