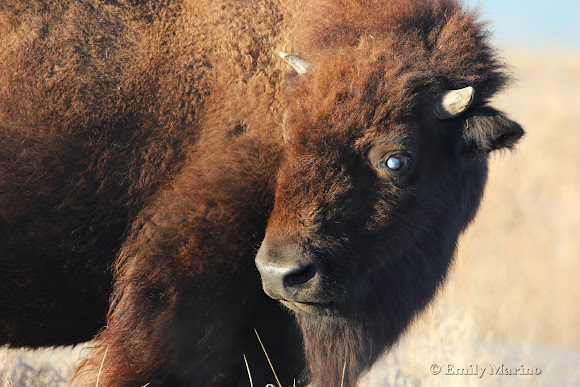 This is a very large bovid with dark brown hair and heavier wooly fur on the front quarters, neck and head. Have short hooking horns. Bulls may weigh as much as 3000 pounds, cows considerably less. Calves are reddish brown.

Bison once ranged across what would become the United States and Canada. They lived in varied habitat from open plains (from which they are best known), to savanna and heavier forest in the eastern United States. This particular animal is a plains bison, which is slightly smaller than its more northerly cousin, the woods bison. They may have been, at one time, the most common grasslands ungulate in the world. Estimates range from 20 to 60 million of these animals once roamed the western prairies of the US and Canada.

We came across this handsome young bull early in the morning. An ulcer and/or cataract could be clearly seen in his left eye. It must effect his vision but doesn't seem to bother him otherwise

Desmond.E.S.O, the red color may be due to the early morning light, but this was his natural color!

That one looks much more red than normal.