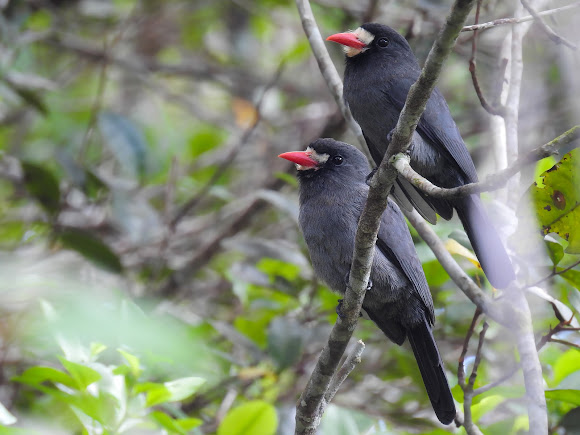 The white-fronted nunbird (Monasa morphoeus) is a species of near passerine bird in the puffbird family (Bucconidae). It is found in the tropical Americas. This glossy black or gray-black bird with a stout, medium red-orange bill is named for the white face markings on the cere, the base of its bill and on the upper throat. It has black eyes and black or gray-black legs.

It occurs in Brazil, Bolivia, Colombia, Ecuador, Peru, and Venezuela; in southern Central America in Honduras, Nicaragua, Costa Rica, and Panama. The white-fronted nunbird is found in the southern Amazon Basin, with the Amazon River as its northern limit, and extends to Maranhão state on the Atlantic coast; in the west, specifically northwest, it is limited eastwards by the lower reaches of the Rio Negro but extends westward towards the eastern Andes foothills. Its range largely skips the Andean cordillera – though it is found in some lower-lying ranges, like the Serranía de las Quinchas in Colombia[2] – and continues west of the Andes into southern Central America to Nicaragua and Honduras.