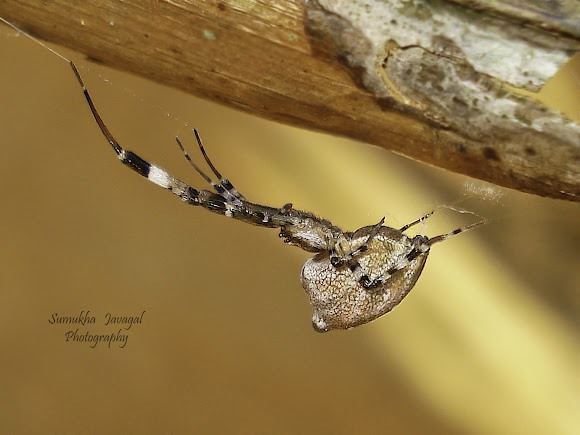 Found this in its web on the wall inside home. Zosis geniculatus is common and easy to recognise. As it is venomless it is a harmless method of controlling insects in your house. The abdomen in triangular in side view, humped in front with a pair of tubercles on the summit.The spider spins a horizontal or inclined orb-web. It creates a ragged blue grey circular web, with star shaped egg sacs. Insects trapped in the web are rolled with the hind legs and wrapped in silk. The bundle is eventually carried to the hub of the web and sucked dry.

Under bridges or in old garages and abandoned sheds. Found throughout the tropics.

Uloborids and several related families have a cigar-shaped plate (cribellum) on the underside of the abdomen, in front of the spinnerets. The upper margin of the second last segment (metatarsus) of the fourth leg is armed with a row of strongly curved spines known collectively as the "calamistrum" (arrowed in diagram, right). It is through the combined action of the cribellum and calamistrum that the bluish silk characteristic of the Uloborids is produced. The front legs of the Uloborids are extraodinarily long, often longer than the entire length of the body. Unlike other spiders, Uloborids do not possess venom glands.

My area has been developed into a subdivision and a lot of trees have been destroyed.

Why so? Have they vanished all of a sudden? They are commonly found in old garages and abandoned buildings.

Very nice find. I was trying to look for those spiders I remember from my childhood but unfortunately I could not see them anymore.

Yeah..:-) This is the first time im finding such a spider..!

What a way to die. Maybe starvation and suffocation!

Yes. After the prey dies, then it starts to feed..!

So how does it immobilize its prey? Wrap in web?

Thanks Jolly..:-) The interesting thing about this spider is that, it doesn't contain any venom..!

Thanks for the ID Chunxingwong..:-)