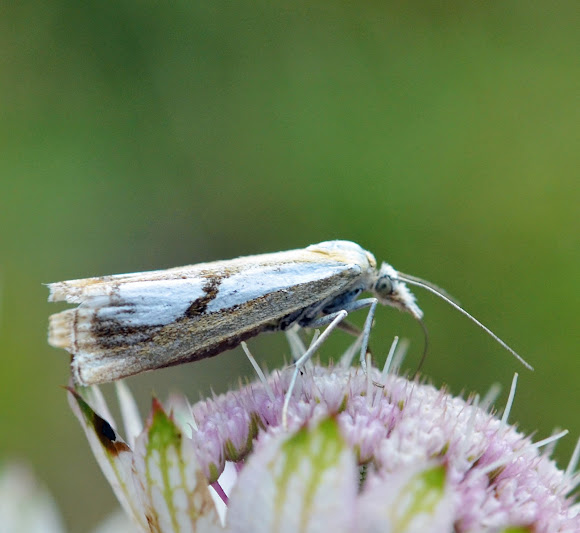 Caloptria is a genus of small moths from the Crambidae family, most of which are found in Europe. Crambidae are quite variable in appearance. The nominal subfamily Crambinae (grass moths) take up closely folded postures as shown here where they are inconspicuous, most often on grass stems.

Spotted in an alpine meadow in the middle of a forest clearing, alt. 1500m ASL. The flower is Astrantia major, the Great Masterwort.

This moth was about 15 mm long with a has a visible snout, and light dusty beige wings with distinctive bluish and brown markings. See Comments for possible species. The last shot shows the habitat for this moth. Spotted in La Pierreuse (meaning "stony place"), a nature reserve in the Swiss Alps.

Thank you bayucca! As these are quite location specific.... I have narrowed it down to possibly 7 (osthelderi, permutallus, speculalis, conchella, pinella, falsella and myella), but I am not 100% convinced any any of them. Also, for many I can't find any pictorial or clear descriptive information. So I will leave it as Catoptria sp. at this stage. I spotted a similar one with different markings about 5 K away, which I still have to upload. Thanks again!

Crambidae, Crambinae, Captoptria sp., there are about 50 species! Sorry, can't get closer, too tricky.

Satyen, Jacob, Lars, thanks! Lars, thank you for the hint, I am checking...

Thank you Satyen! A paradise for plants and insects for sure.

Sorry Satyen, I have now uploaded it, together with a second shot for the moth (I had the same shot twice...)

Lovely spotting, great colours. I don't think I can see the habitat :-)