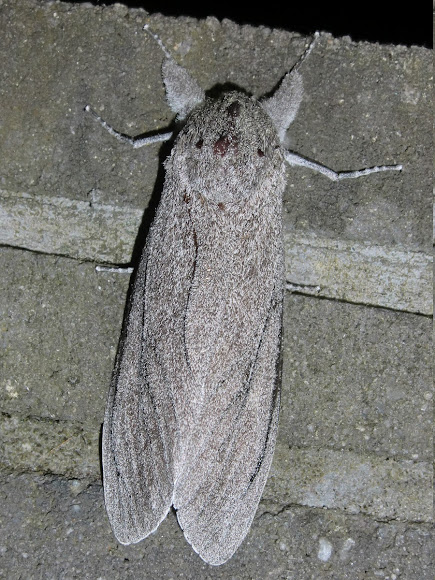 This moth was so large and heavy looking that Leuba and I were suffering fits of laughter when we found her. Measured 100mm long body and an estimated wingspan about 200+mm. A very plain livery of grey crushed velvet all over but scale loss? had revealed black around wing venation.

Attracted to night lights at the local school.

That's not a cossid - this is a cossid. One female of this species weighed 28gms.
Australia has a disproportionately high number of cossid moths and only about one quarter are described. Many undescribed species are known to be very large moths and likely the heaviest moths in the world.
We tried to get underwing views but she would flick us off with a single snap of a wing.
I thought our dog had climbed onto the brick wall.

Glad you got an ID and to know that it is possibly the second heaviest Cossid/Moth in the world !

Finally convinced of an ID.

Best Cossid spotting so far and well done to Mark for spotting this ! I wish we could have taped the "whip-crack" sound she made in response to Mark's tentative attempts to lift one of her wings - scary !
Jemma, Mark even tried to have a sniff to see if she smelt like a goat - :)

Wow. now THAT is a big moth :-D She is really clinging to that brick too

amazing indeed!! I would love to see her moving the bricks!!