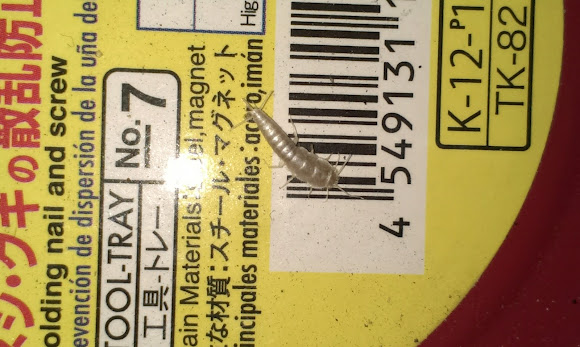 Silverfish or fishmoth, a small, wingless insect in the order Thysanura. Its common name derives from the animal's silvery light grey and blue colour, combined with the fish-like appearance of its movements, while the scientific name (L. saccharina) indicates the silverfish's diet of carbohydrates such as sugar or starches. Silverfish are nocturnal insects typically 13–25 mm (0.5–1 in) long. Their abdomens taper at the end, giving them a fish-like appearance. The newly hatched are whitish, but develop a greyish hue and metallic shine as they get older. They have three long cerci at the tips of their abdomens, one off the end of their body, one facing left, and one facing right. They also have two small compound eyes, despite other members of Thysanura being completely eyeless, such as the family Nicoletiidae. Like other species in Apterygota, silverfish completely lack wings. They have long antennae, and move in a wiggling motion that resembles the movement of a fish. This, coupled with their appearance, influences their common name. Silverfish typically live for two to eight years.

Silverfish are a cosmopolitan species, found in Africa, the Americas, Europe, Australia, Asia, and other parts of the Pacific. They inhabit moist areas, requiring a relative humidity between 75% and 95%. In urban areas, they can be found in basements, attics, bathtubs, and showers.

Silverfish consume matter that contains polysaccharides, such as starches and dextrin in adhesives. These include glue, book bindings, plaster, some paints, paper, photos, sugar, coffee, hair, carpet, clothing, and dandruff. Silverfish can also cause damage to tapestries. Other substances that may be eaten include cotton, linen, silk, synthetic fibres, dead insects, or even its own exuvia (moulted exoskeleton). During famine, a silverfish may even attack leatherware and synthetic fabrics. Silverfish can live for a year or more without eating. Silverfish are considered a household pest, due to their consumption and destruction of property. Although they are responsible for the contamination of food and other types of damage, they do not transmit disease. Earwigs, house centipedes, and spiders are known to be predators of silverfish.

Very good information. I've always wondered what exactly these little guys do - Thanks for sharing.