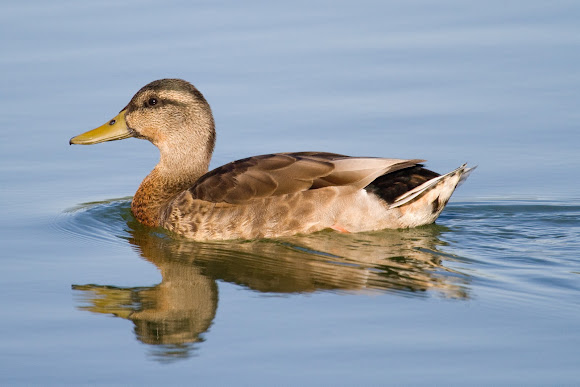 The Gadwall is 46–56 cm (18–22 in) long with a 78–90 cm (31–35 in) wingspan.[2] The male is slightly larger than the female, weighing on average 990 g (35 oz) against her 850 g (30 oz).[3] The breeding male is patterned grey, with a black rear end, light chestnut wings, and a brilliant white speculum, obvious in flight or at rest.[4] In non-breeding (eclipse) plumage, the drake looks more like the female, but retains the male wing pattern, and is usually greyer above and has less orange on the bill.[3] The female is light brown, with plumage much like a female Mallard. It can be distinguished from that species by the dark orange-edged bill, smaller size, the white speculum, and white belly.[4] Both sexes go through two moults annually, following a juvenile moult.[2] The Gadwall is a quieter duck, except during its courtship display. Females give a call similar to the quack of a female Mallard but higher-pitched, transcribed as gag-ag-ag-ag. Males give a grunt, transcribed as nheck, and a whistle