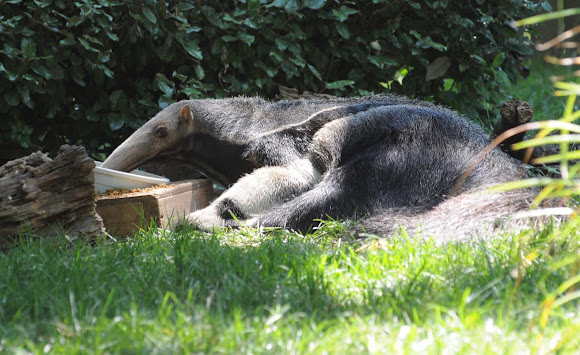 The giant anteater can be identified by its large size, elongated muzzle and long tail. It has a total body length of 182–217 cm (5.97–7.12 ft). Males weigh 33–41 kg (73–90 lb) and females weigh 27–39 kg (60–86 lb), making the giant anteater the largest extant species in its suborder. The head of the giant anteater, at 30 cm (12 in) long, is particularly elongated, even when compared to other anteaters. Its tubular snout, which ends in its tiny mouth opening and nostrils, takes up most of its head. Its eyes and ears are relatively small. It has poor eyesight, but its sense of smell is 40 times greater than that of humans. Anteaters have survived up to 16 years in captivity. The giant anteater's coat is mostly grey and salted with white dots. A stiff mane travels along its back. Unlike other mammals, anteater necks, especially the giant's, are thicker than the backs of their heads. A small hump can be found at the back of its neck. Its forelimbs are white, with black bands around the wrists, while its hind limbs are dark. Thick black bands with white outlines stretch from throat to shoulder, where they end in triangular points. The body ends in a brown tail. Despite the tropical climate, anteater coat hairs are long, especially on the tail, which makes the tail look larger than it actually is. This dense coat makes up for its relatively low body temperature of 33 °C (91 °F), a few degrees lower than typical mammalian temperature of 36–38 °C (97–100 °F). While adult males are slightly larger and more muscular than females; with wider heads and necks, visual sex determination can be difficult, since the penis and testes are located internally between the rectum and urinary bladder in males and females have a single pair of mammary gland near the armpits. (information from Wikipedia)

This anteater was spotted at National Zoo in Washington, D.C.. It was snacking from a food dish late in the day. Sadly, the lighting was poor and these shots are not my favorites.

What a lucky spotting!!!

these are just so cute!