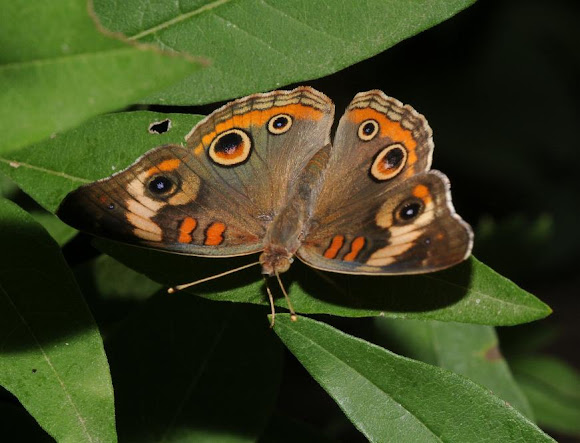 The bold pattern of eyespots and white bars on the upper wing surface is distinctive in much of its range, though compare related species in the same genus. These are Mangrove Buckeye (Junonia evarete) and Tropical Buckeye (Junonia genoveva), formerly considered one species, and the Smoky Buckeye (Junonia evarete). The eyespots likely serve to startle or distract predators, especially young birds. The species has many flights throughout the year, with mostly northward migrations for the summer. Much of the northern United States is only colonized in the fall from southern populations. Some of the later broods move southwards in the fall. Common Buckeyes exhibit seasonal polyphenism, the summer version of the butterfly has light yellowish ventral wings and is called "linea". The Fall morph has pink ventral wings, and is called the "rosa" morph. (information from Wikipedia)

nice spotting, can you say or sing: HOT FUN IN THE SUMMER TIME. : ) Dedication man, I love it.

You can't stop me from spotting! hahahaha! Yep, and we hadn't even gotten to the high temp yet.

Thank you. This one kept flying away when I'd approach, so I had to take my time with it. The temperature at shooting was 107 degrees and I was melting! *whew!*