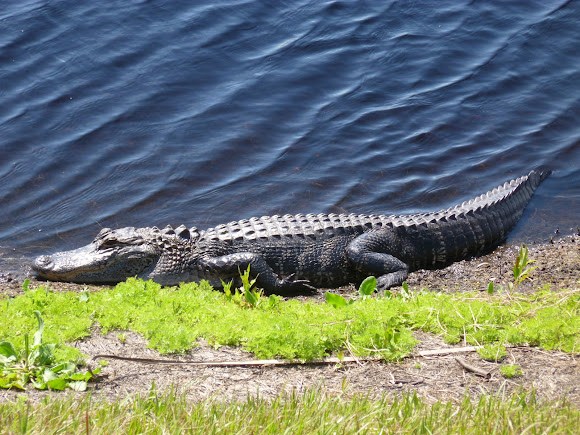 The American alligator is recognized by its broad rounded snout, wide flattened head, slightly raised eyes on the top of the head, and you will only see downward pointing teeth when the jaws are closed. Young alligators are black with bold yellowish-white bands. Most alligators are fairly docile and will often swim away if you get close. They do become more aggressive during mating and nesting season. Mama gators are very protective of their nest and young. Females have a pig-like grunt sound while the males are louder and sound more like a bellow. The babies make a high-pitched "yunk yunk" sound.

Ponds, swamps, rivers, freshwater and brackish marshes, mangroves, canals and occasionally the ocean. Pretty much anywhere in Florida where there is water, you can expect to see an alligator at some time. During droughts alligators will dig out gator holes in ponds and marshes to deepen them. This creates habitat for other aquatic animals during drought and increases the diversity of wetland plants. They hibernate in muddy wallows during the cooler months.

Alligators were once listed as an endangered species in Florida and protected under the Endangered Species Act. Now they are becoming quite common and they play an important role in a healthy Florida ecology. One of the most important things to know about alligators is: Never Feed them. A fed alligator is a dead alligator because they quickly lose their fear of people and become a danger to the public.