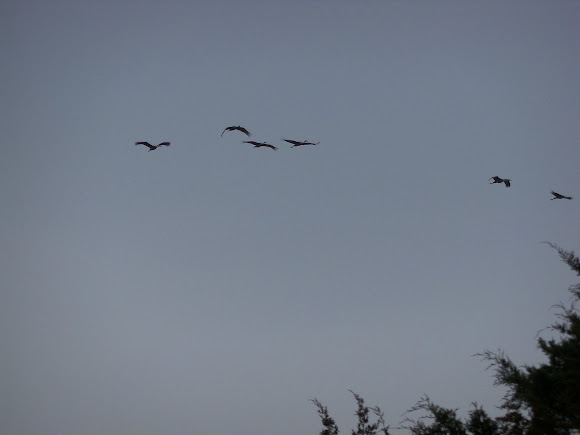 Sandhill cranes are large birds with heavy bodies and long necks and legs. They stand about 1.2 m tall, with wing spans of about 2 m. They are uniformly grayish, with a white cheek and a bald red crown. Sandhill cranes can be distinguished from other large wading birds in flight by their outstretched neck, and their wingbeats, which are a slow downward beat followed by a quick upward flick. Male and female sandhill cranes are similar in appearance, though males are usually larger than females. For example, males of the G. c. canadensis subspecies average 3.75 kg whereas females average 3.34 kg. Juvenile sandhill cranes tend to be much more brownish than adults. There are six subspecies of sandhill cranes. These subspecies are distinguished based upon morphology (size) and geographic separation.

Most sandhill crane populations nest in open grasslands, such as wet meadows, and freshwater marshes or bogs. There are six subspecies of sandhill cranes, and each typically nests in the open, wet grassland habitats of their region. The Cuban population of sandhill cranes (Grus canadensis nesiotes) is an exception, inhabiting dry, isolated regions, sometimes in rocky and mountainous terrain. Sandhill cranes prefer to be far from human habitation. However, during migration, they are commonly seen feeding on crops and crop residue in agricultural fields. At night they congregate to roost in large marshes.

These Sandhill Cranes were spotted flying over at the Hiwassee Wildlife Refuge at Birchwood, TN. It was an overcast, drizzly day and no cranes were close to the viewing platform.