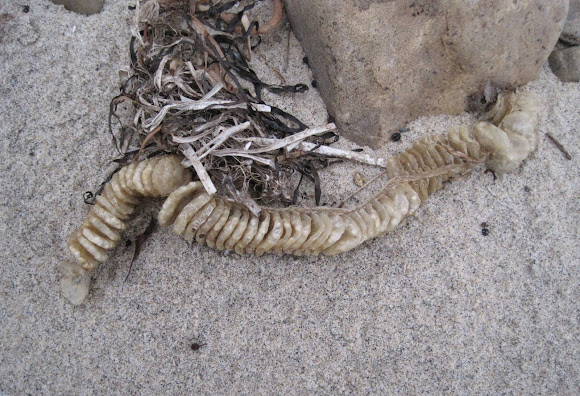 The Knobbed Whelk is a large predatory mollusk. It feeds on marine bivalves like Oysters, Clams and such. The shell has knob-like protrusions extending from the largest coil. The outside of the shell can range in color from ivory to pinkish-purple to gray. They smaller shells tend to be more colorful. The inside of the opening of the shell is orange and smooth. The disc shaped egg cases are laid in a string, usually attached to the substrate under the water. These are sometimes called "Mermaids Necklaces). Each egg case contains 0-99 eggs. Occasionally, a string breaks free and floats away. This helps to distribute the snail further. (Wikipedia and other resources). This Whelk and other related species are harvested for their meat and shells.

These are common in this area (New York). We find the shells washed up on the beach frequently and live ones can be found in the water, especially at low tide. The egg cases and shell in my pictures were found on the beach. The living organism that used to reside in the shell was most likely eaten by a gull (judging by the large cracked hole in the shell).