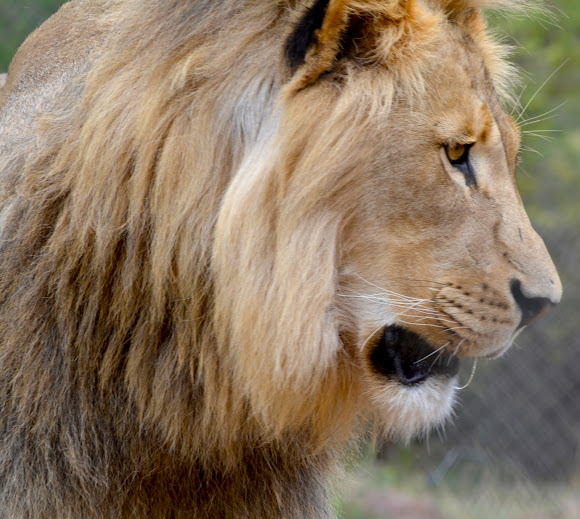 These guys were let down by humans. They are in a rehabilitation centre close to the Kruger NP. Many are from zoo's or circuses or from folks who took cubs as "pets" until they got out of control. Many will never go back to wild as they either can't hunt for themselves or they are too familiar with humans. Very sad indeed.

Ten Interesting Facts: 10. African lions are the most social of all big cats and live together in groups or “prides.” A pride consists of about 15 lions. 9. Male lions defend the pride’s territory while females do most of the hunting. Despite this, the males eat first. 8. These majestic cats are threatened by habitat loss. The lion is listed as vulnerable on the IUCN Red List of Threatened Species. 7. The lion was once found throughout Africa, Asia and Europe but now exists only in Africa with one exception. The last remaining Asiatic lions are found in Sasan-Gir National Park in India, which was primarily created to protect the species. Currently, there are approximately 350-400 lions in the park. 6. A lion’s roar can be heard from as far as 5 miles away. 5. A lion can run for short distances at 50 mph and leap as far as 36 feet. 4. Even though the lion is sometimes referred to as the “king of the jungle,” it actually only lives in grasslands and plains. The expression may have come from an incorrect association between Africa and jungles or may refer to a less literal meaning of the word jungle. 3. A good gauge of a male lion’s age is the darkness of his mane. The darker the mane, the older the lion. 2. A lion’s heels don’t touch the ground when it walks. 1. A lion may sleep up to 20 hours a day.

thank you C.Sydes. So sad these guys are enclosed, so it is easy to take a photo. What really matters is the one you spotted in Botswana, now that is a real thrill!
all these lions are rehabilitated due to human's cruel side. But they are in safe hands now, just wish they knew that. What difficult times we live in....

great portraits of a beautiful species.

I don't know the area that well, but it is definitely in that area. I'd love to mention the name, but I don't know if I'm allowed to?

Great series - is this the Hoedspruit facility by any chance?