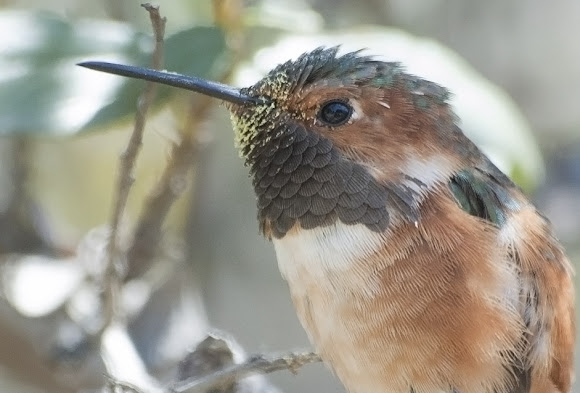 "The Allen's Hummingbird, Selasphorus sasin, is a species of hummingbird. The Allen's Hummingbird is a small bird, with mature adults reaching only 3 to 3½ inches (75 to 90 mm) in length. The male Allen's has a green back and forehead, with rust-colored rufous flanks, rump, and tail. The male's throat is also an iridescent orange-red. The female and immature Allen's Hummingbirds are similarly colored, but lack the iridescent throat patch, instead having a series of speckles on their throat. Females are mostly green, featuring rufous colors only on the tail, which also has white tips." - http://en.wikipedia.org/wiki/Allen's...

beautiful Liam,lovely bird great photos,congrats and thanks for sharing such a beauty