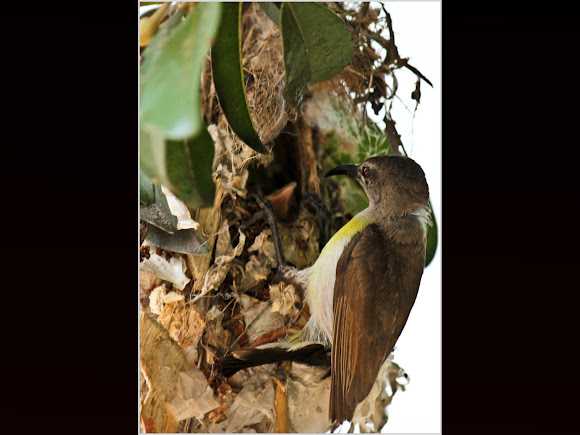 The Purple-rumped Sunbird (Leptocoma zeylonica) is a sunbird endemic to the Indian Subcontinent. Purple-rumped Sunbirds are tiny at less than 10 cm long. They have medium-length thin down-curved bills and brush-tipped tubular tongues, both adaptations to their nectar feeding. Purple-rumped Sunbirds are sexually dimorphic. The males have a dark maroon upperside with a blue-green crown that is visible in some angles. There are violet patches on the throat and rump which are visible only in good lighting. There is also a maroon breast band. In the Western Ghats, it can overlap in some areas with the Crimson-backed Sunbird but that species has reddish upperparts. The female has a white throat followed by yellowish breast. There is a bright green shoulder patch. The upperside is olive or brownish. The uppertail coverts are black and a weak supercilium is visible.

Purple-rumped Sunbird is a common resident breeder in southern India, Sri Lanka and Bangladesh. It is found in Gujarat to the west (possibly a recent expansion) and extending into Assam (Hailakandi) or Meghalaya in the east. Records from Myanmar are not certain. This species is found in a variety of habitats with trees, including scrub and cultivation and is usually absent from dense forest.