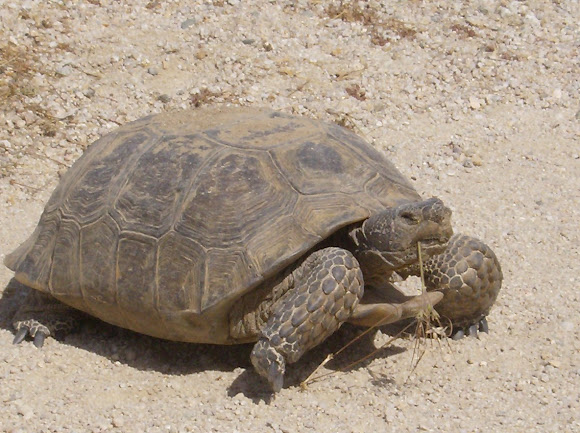 Listed as vulnerable by the IUCN and California's state reptile. Placed on both the California and Federal Endangered Species Lists in 1989 and 1990, respectively. Its status is "threatened," just one notch below "endangered." Several factors conspired to diminish the population of the desert tortoise. As more people moved into the western deserts, the resultant loss of habitat made a serious dent in the number of tortoises. With more people came more ravens, large black birds with a keen appetite for hatchling tortoises. The number of ravens has exploded in recent years, due in large part to their ability to thrive in developed areas. The factors contributing to their dramatic increase include more roads, thus more roadkill; landfills; powerline poles, an ideal lookout post for hungry ravens; and littering. Litter in the park attracts ravens, so please dispose of your garbage responsibly. Perhaps because of the release into the wild of former pet tortoises during the past several decades, a deadly bacterial infection began to appear more and more frequently among wild tortoises. Upper Respiratory Tract Disease attacks the tortoise's respiratory system and can be transmitted through sharing of burrows, or through human handling of tortoises. This can occur when a person handles a sick tortoise and then unwittingly transmits the disease to a healthy animal.

Adapted for a desert climate. It is estimated that desert tortoises have existed for 15 to 20 million years. Perhaps this long stint on Earth has given them plenty of time to consider wise living strategies, such as careful, slow-paced locomotion; a healthy diet full of greens; resting during winter and summer, the desert's most challenging seasons; and water conservation. The typical tortoise diet consists of grasses, wildflowers, cactus pads, and wild fruit. Occasionally a tortoise will eat bone material scavenged from mammal scat as a means of obtaining calcium. Its stumpy, elephantine legs end in sharp claws, which are adapted to walking in sand and to digging dens or burrows used for both hibernation and estivation (summer "hibernation"). Tortoises construct dens up to 30 feet in length-in general, summer burrows are shallower and shorter. Because they are cold-blooded, tortoises are not able to regulate their body temperature internally. Burrowing is an adaptation that mitigates the effects of the desert's temperature and moisture extremes, and protects animals from predators. Desert tortoises also dig depressions in the earth to catch rainwater. They are able to store water in their urinary bladder and significantly increase their body weight when tanking up after a good rainstorm.

This was taken in Zzyzx, near California State University's Desert Studies Center in the Mojave Desert in southern CA.