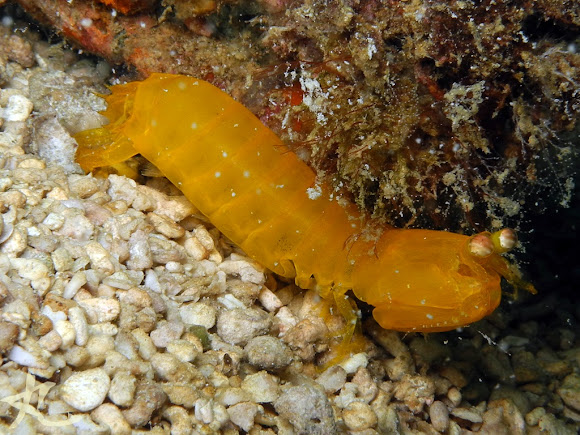 Also known as Common Mantis Shrimp and False Mantis Shrimp, this arthropod can change colors across molts, depending on its surroundings. It feeds on small crustaceans, shrimp, worms, and small fish. It can reach a total length of 9.5cm.

P. ciliata digs a U-shaped burrow in sandy bottoms, on reef flats or seagrass beds, often near coral reefs. It's a diurnal species, closing up its burrow at night. Distribution: tropical and subtropical waters (except west coast of the Americas); widespread in the Indo-Pacific region.

Spotted this in about 15m of water at Dayang Beach. It measured roughly 4cm long.

Thanks very much for the info, meangrneyes!

Yay! Finally got this crustacean identified. :)

Thanks, Lori and Scott! Any idea which species of mantis shrimp, though?