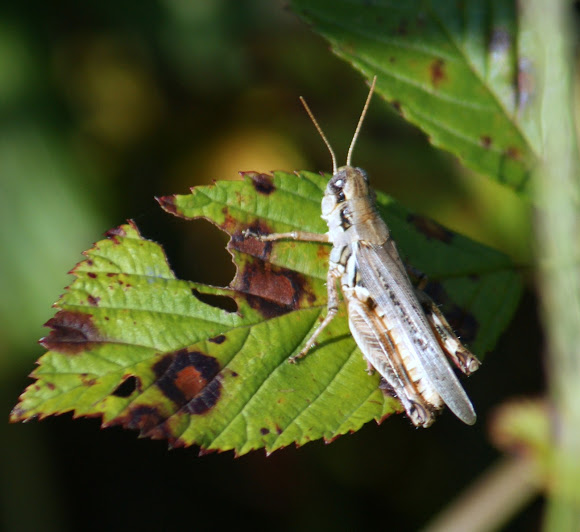 Very similar to several other species, and females in particular can be very difficult to distinguish. This species is best determinded by looking at males, in which the abdomen is only moderately swollen toward the tip. The subgenital plate is somewhat projecting and notched at the tip. The furculae are well developed, slender, pointed. The cerci are wide, slightly upturned apically, sligtly tapering, and rounded at tip. The males and often the females have a lot tubercle on the metasternum. The Hind femur varies in pattern, but usually there are indications of diagonal cross banding on the outer face overlaid on a herringbone pattern. The hind tibiae vary greatly in color, but most often are blue or red. They may also be brown, yellow, orange, pink, purple, or gray. Nymphs are very much like those of M. femurrubrum, except that the dark bar below the eye is more often missing, and the dark stripe on the outer face of the hind femur is usually crossed completely by a diagonal light band and a light patch near the base.

Range is most of North America north of tropics and south of arctic. A wide range of open sunny areas with hebaceous plant cover. This one was spotted at the Silver Bluff Audubon Center near Jackson (Aiken County), SC.