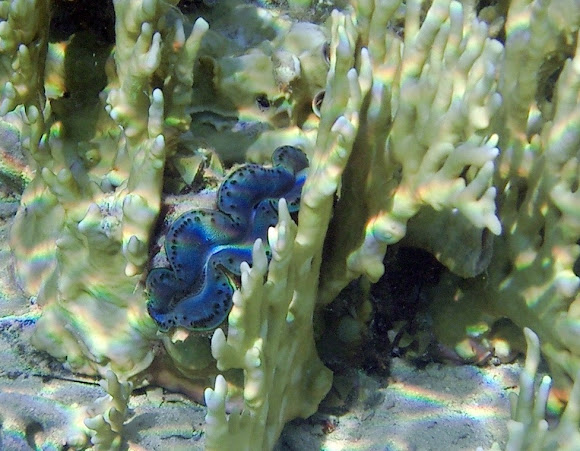 "The small giant clam is less than a third of the size of the true giant clam (Tridacna gigas). As an adult, it has a large shell that adheres to a rock by its byssus, a tuft of long, tough filaments that protrude from a hole next to the hinge of the shell. When open, the bright blue, green or brown mantle is exposed and obscures the edges of the shell which have prominent distinctive furrows. The small giant clam is a bivalve mollusc, referring to the two valves on the mantle. These siphon water through the body in order to extract oxygen from the water using the gills and to feed on algae. The attractive colours of the small giant clam are the result of pigment cells, which have a crystalline structure inside. These are thought to protect the clam from the effects of intense sunlight, or bundle light to enhance photosynthesis, the energy-producing process carried out by the tiny algae living within." ~ wiki

"The small giant clam has the widest range of all giant clam species. It is found in the oceans surrounding east Africa, India, China, Australia, Southeast Asia and the islands of the Pacific. Found living on the surface of reefs or sand, or partly embedded in coral, the small giant clam occupies well-lit areas, due to its symbiotic relationship with photosynthetic algae, which require sunlight for energy production."