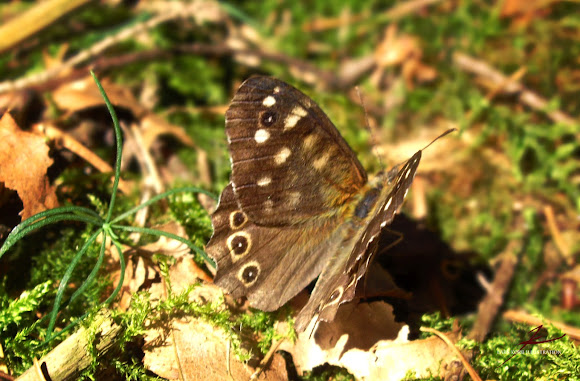 Females have brighter and more distinct markings than males. The wingspan of both males and females is 4–4.5 cm, although males tend to be slightly smaller than females. Males are highly territorial and will defend their territory against intruding males. Two basic strategies exist for finding females: some males will vigorously defend a perch and the immediate surroundings, waiting for females to pass by; others will patrol a larger territory. Males have either 3 or 4 upper hindwing eyespots; the fourth spot shows only in flight. It appears that the 4-spotted morph tends towards patrolling behaviour to finds mates. This agrees with the probable function of the eyespots to entice predators like birds to aim for the wing margin (which may be damaged without much affecting the butterfly) rather than the body. On the other hand, habitat is apparently a major factor influencing mate-finding strategy as perching behavior is more common in males of conifer woodland, whereas males of meadows tend towards patrolling behavior.