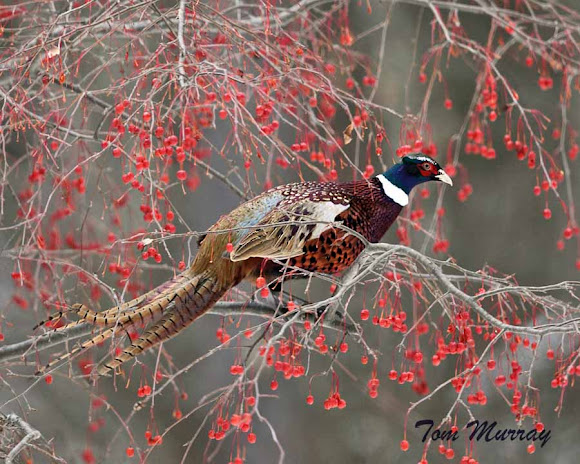 Ring-necked Pheasants stride across open fields and weedy roadsides in the U.S. and southern Canada. Males sport iridescent copper-and-gold plumage, a red face, and a crisp white collar; their rooster-like crowing can be heard from up to a mile away. The brown females blend in with their field habitat. Introduced to the U.S. from Asia in the 1880s, pheasants quickly became one of North America’s most popular upland game birds. Watch for them along roads or bursting into flight from brushy cover. (Cornell)

While doing the Audubon Christmas Bird Count I noticed this pheasant feeding on fruit from an ornamental tree directly in front of a house. I took a few photos from the car until eventually the pheasant realized I was there and it ran off.

Thanks Lauren and Mark.

Congratulations Tom, beautiful picture, almost like a painting! I love their tail feathers.

Thanks for all the nice comments! Everything worked out well to get this picture. The car substitutes as a nice blind and when I first saw the pheasant, it was towards the back of the tree and behind many berries. After a few minutes it came out like this in the front and must have eventually heard the shutter on my camera going like crazy and then it ran off.

Nice:) Glad that you stayed unnoticed for the shot.

Wonderful shot and lucky you to have this beauty spotted right outside your house!

Congratulations Tom on your SOTD

Congratulations Tom, your colorful pheasant is Spotting of the Day!

Native to China and East Asia, these colorful birds have been introduced to North America and other parts of the world.

Thanks Kathleen and Tiz!

Ava and António, that's a good idea. I think I will make a card out of this picture. Thanks for all the nice comments.

Iam with Ava Tom :-) the perfect spotting for the occasion,very good photo,congrats and thanks for sharing

and 42 other people favorited this spotting