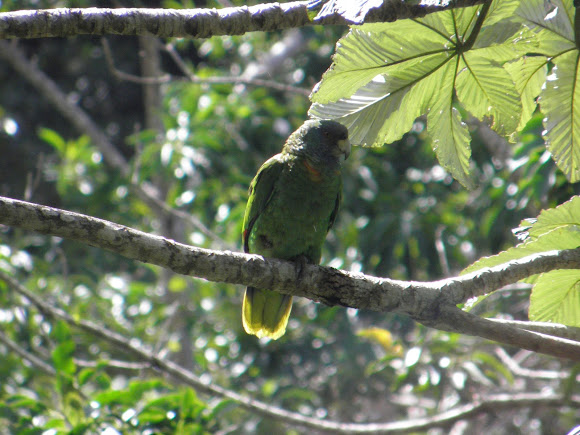 Bright green all over, except for the face which is bluish. Its undertail is yellow, and it has some red on the wings. Most will have the red patch on the throat (with or without a touch of yellow or orange), but some won't. The bill and feet are dark gray, and the adults' eyes are reddish with an orangeish eye-ring. *One of the local names, "Pawotje set-koule" literally means seven-coloured parrot.*

The first bird is sitting in a tree that is next to an orange orchard. The second bird (last pic) is sitting in an orange tree and had been chowing down on one before this pic. Along segment 10 of the Waitukubuli Trail (Colihaut Heights to Syndicate) near Syndicate, Dominica. (I have a spotting of a Bananaquit at the same orchard, same time - http://www.projectnoah.org/spottings/124... )

The smaller of two Amazon parrots endemic to the island of Dominica. *IUCN lists this bird as vulnerable - http://www.iucnredlist.org/details/22686... * It is also "specially protected...under the laws of Dominica". The other is the Imperial Parrot "Amazon imperialis" *IUCN lists this bird as endangered - http://www.iucnredlist.org/details/22686... * which I actually got to see - in the wild!!! - with 'Dr Bird' Bertrand Baptiste! However, I was unable to photograph it due to the distance between us and the bird. - First reference for identification "Dominica's Birds", p71, Arlington James, Stephen Durand, and Bertrand Jno. Baptiste, 2005.