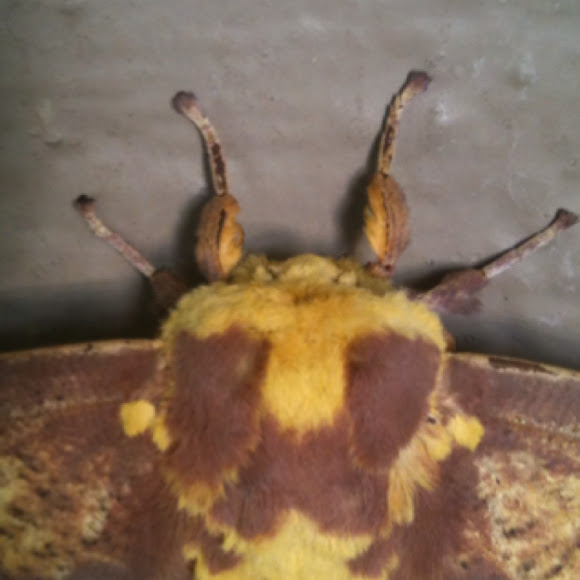 Imperial moths (their many regional morphs, subspecies and sibling species) range from Mexico to Canada and from the Rocky Mountains to the Atlantic Coast. Nominate Eacles imperialis imperialis has been recorded historically from New England and Southern Canada, south to the Gulf Of Mexico and west across the Great Plains. In modern times, its range has receded northward (where it was always a good find); it is considered common south of the Mason-Dixon line. Subspecies E. imperialis pini occurs in coniferous and transition zone woodlands at the northern edges of the New England and Great Lakes States and northward into Canada. In the southwest, closely related Eacles oslari replaces imperialis, and thence southward into Mexico. Eacles imperialis is one of a few saturniid species in a regional decline throughout the northeastern US, with some New England states lacking records for many decades. A colony on Martha's Vineyard, Massachusetts has been the subject of scientific and local political activity, especially concerning preservation of sensitive frost-bottom oak/pine habitat. Reasons for decline are unclear, as is the true northern limits of nominate imperialis' range, due to possible confusion with subspecies pini in existing records. Imperialis is certainly a common species of middle-atlantic states, appalachia, the Ohio Valley and Deep South regions, and is associated with forest, rural and suburban habitat. It is possible that to the north, imperialis requires specific habitat and the increasing fragmentation of niches such as coastal or montane pine barrens is a factor. There is a high amount of variation within this species. The colors of the adult are always yellow and purple but can vary distinctly on this. Generally there is more purple on the forewing and more purple on males. However, one subspecies tends to have a distinct coating of purple over the entire wings. Darker, heavily mottled individuals are typical forms of the southern and western range and may represent a clinal variation of nominate imperialis. Subspecies pini to the north, and sibling species Eacles oslari to the southwest exhibit similar morphs. Regional foodplant preferences have been noted as well, although captive-bred populations from all sources are nearly omnivorous. The Imperial Moth is perhaps the only example of such a creature as a character in a novel. Naturalist Gene Stratton Porter's "Girl Of The Limberlost" features imperialis prominently in the plot development, and her account of its life history in "Moths Of The Limberlost" (a chronicle of her discovery of lepidoptera in early 20th Century rural Indiana) captures not just the science but the charm of the giant silk moths and childhood discovery of nature.

On my front porch.