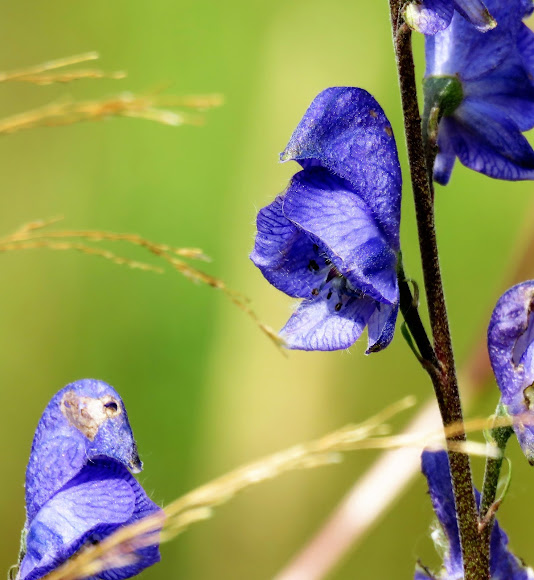 Difficile to decide between variegated and common monkshood; they are both blue-purple; I'm more inclined toward the variegated monkshood in this picture, because of the more blueish color and the size of plant seen (>150cm). Anyway, the Aconitum species are also known as aconite, monkshood, leopard's bane, mousebane, women's bane, devil's helmet, Queen of all Poisons, or blue rocket... and are often confused with Wolfsbane, whose flowers are yellow. The tall and erect stem is crowned by racemes of large blue to purple flowers, with a characteristic "helmet" like structure formed by one of the five sepals.

Many species from Aconite genus are potently poisonous, and contain several poisonous compounds, such as alkaloids aconitine, mesaconitine, hypaconitine and jesaconitine, all highly toxic. Literature has it that extracts of Aconites were used on spears and arrows for hunting and battle; but also that it was used as poison to eliminate enemies throughout history.