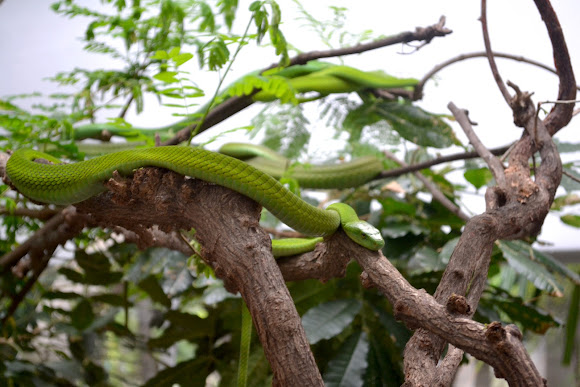 The eastern green mamba is overall glossy green in color with a lighter bright greenish-yellow belly. This is the smallest Mamba (dendroaspis) species, averaging only 1.4 metres (4.6 ft) in length. The maximum size for this species is 2.4 metres (7.9 ft), but this is uncommon. Male eastern green mambas are generally slightly larger than females. The species has two enlarged venom fangs fixed to the front of the mouth and solid teeth in both jaws. It has very smooth scales, is thin and elegant with a very distinctive head that is long and rectangular and they have a long thin tail. Their eyes are medium in size with round pupils. Dorsal scales are oblique, smooth and narrow. Dorsal scale count usually 25 - ( 21 or 23 ) - ( 15 to 19 ). Eastern green mamba hatchlings have a yellowish-green color.

Eastern green mamba's are an arboreal species and thus are almost always found in trees. Very rarely are they found on the ground unless driven by prey or for their need to bask under the sun. They are not usually found in open terrain. Thickly forested and bush-covered areas such as evergreen forests, mainly make for this species' habitat. They can also be found in regions like coastal scrub, woodland, moist savanna, bamboo and mango plantations.

Habits Green mambas are mainly arboreal, (live in trees), but also known to inhabit bamboo thickets, mango groves and coastal shrubland. Shy, non-aggressive and only likely to attack if provoked or cornered. Diet consists mainly of birds, bird eggs and small mammals. Green mambas are active during the day, (diurnal), but seldom seen on the ground unless after their prey or basking in the sun.

Hi Kei, you are right, this is the Green Mamba. I have to admit when I make a mistake, and this is one of them. Making the changes now. Would still love to a Boomslang though!

Definitely not a Boomslang. They have larger eyes than this, body is thinner in general. The shape of the head is egg shaped a you stated in your description. Still a beautiful specimen!!

Can anyone tell from pictures if this is indeed a Boomslang and not a Green Mamba?