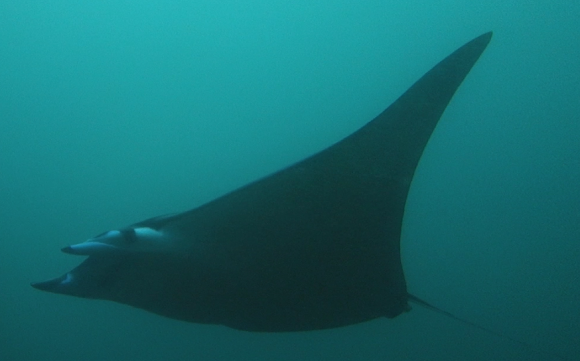 The Devil Ray or Giant Devil Ray (Mobula mobular) is a species of eagle ray, family Myliobatidae. They are most common in the Mediterranean Sea and can be found elsewhere in the Eastern Atlantic Ocean, off the southwest coast of Ireland and south of Portugal. It is larger than the lesser devil ray, growing to a maximum length of 5.2 metres (17 ft), and it possesses a spiny tail. The species feeds on crustaceans and small schools of fish. The devil fish has a limited range and a low rate of reproduction. As a result it is sensitive to environmental changes. The main threats to this species come from pollution in the Mediterranean and accidental, unintended capture in various fishing equipment including trawls, tuna traps, and dragnets meant for swordfish, none of which are intended to ensnare Giant Rays. The 2004 IUCN Red List listed the devil fish as a vulnerable species, but in 2006 it was reclassified as an endangered species.

This Devil Rays are mostly pelagic but they regularly comes to the Reef to get cleaned by Cleaner Fishes, especially Cleaner Wrasse. This particular spotting was at a Cleaning Station in Monad Shoal, Malapascua.