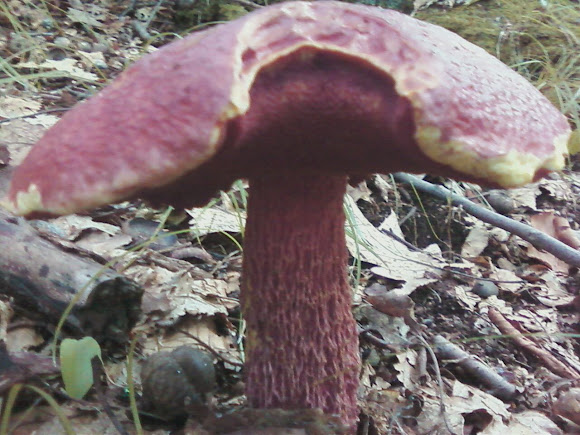 Boletus frostii, commonly known as Frost's bolete or the apple bolete, is a bolete fungus first described scientifically in 1874. A member of the Boletaceae family, the mushrooms produced by the fungus have tubes and pores instead of gills on the underside of their caps. Boletus frostii is distributed in the eastern United States from Maine to Georgia and Arizona, and south to Mexico and Costa Rica. A mycorrhizal species, its fruit bodies are typically found growing near hardwood trees, especially oak. Boletus frostii mushrooms can be recognized by their dark red sticky caps, the red pores, the network-like pattern of the stem, and the bluing reaction to tissue injury. Another characteristic of young, moist fruit bodies is the amber-colored drops exuded on the pore surface. Although the mushrooms are considered edible, they are generally not recommended for consumption because of the risk of confusion with other poisonous red-pored, blue-bruising boletes. B. frostii may be distinguished from other superficially similar red-capped boletes by differences in distribution, associated tree species, bluing reaction, or morphology.

Boletus frostii is a mycorrhizal species,[24] meaning that the fungus forms associations with the roots of various species of trees. These associations are mutualistic, because the fungus absorbs mineral nutrients from the soil and channels these into the plant, while the plant provides the fungus with sugars, a product of photosynthesis. The characteristic feature of the mycorrhiza is the presence of a sheath of fungal tissue that encases the terminal, nutrient-absorbing rootlets of the host plant. The fungus forms an extensive underground network of hyphae that radiate outward from the surface of the root sheath, effectively increasing the surface area for nutrient absorption. The hyphae also invade between the root cortical cells to form a Hartig net.[25] Using pure culture techniques, Boletus frostii has been shown to form mycorrhizae with Virginia pine (Pinus virginiana),[24] while a field study confirms a similar association with the oak Quercus laurina.[26] The fruit bodies grow solitarily, scattered, or in groups on the ground under hardwood trees; the fungus fruits in summer to early autumn. William Murrill noted its preference for growing in "thin oak woods, where the light is sufficient to enable grass to grow",[7] and Alexander H. Smith mentioned its preference for growing in "thin, sandy soil under scrub oak."[3] In the United States, it is distributed from Maine south to Georgia, extending west to Tennessee, Michigan, and southern Arizona.[4][13] In Mexico, it is often found under Madrone.[11] It has also been collected in Costa Rica, where it associates with the oak species Quercus copeyensis, Q. costaricensis, Q. rapurahuensis, and Q. seemanii.[27] A 1980 publication tentatively suggested that the fungus was also present in Italy,[28] but the author later determined that the putative B. frostii was actually Boletus siculus.

Haha, certainly looks that way -- it was the slugs, I imagine, who took the big bite out of it however.