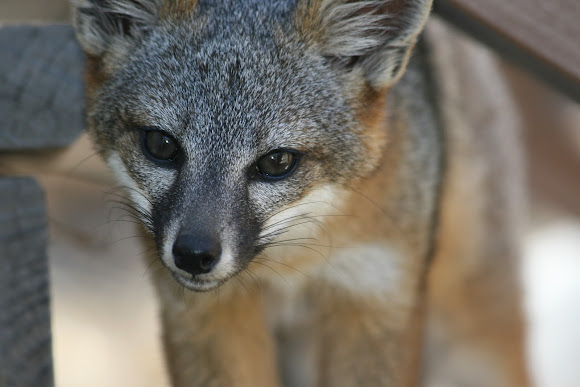 This critically endangered species is restricted to six of the California Channel Islands off the coast of southern California, USA. The population has suffered declines of more than 80% in recent years, primarily caused by Golden Eagle predation and possible introduction of canine disease (e.g., canine distemper virus (CDV)). Population decline is expected to continue.

Island Foxes occur in all habitats on the islands including native perennial and exotic European grassland, coastal sage scrub, maritime desert scrub, Coreopsis scrub, Isocoma scrub, chaparral, oak woodland, pine woodland, riparian and inland and coastal dune. Although fox density varies by habitat, there is no clear habitat-specific pattern. When fox populations were dense, foxes could be trapped or observed in almost any of the island habitats, except for those that were highly degraded owing to human disturbance or overgrazing by introduced herbivores. More recently, foxes have become scarce owing to precipitous population declines. On the northern Channel Islands where the declines are principally a consequence of hyperpredation by Golden Eagles (Aquila chrysaetos) (Roemer et al. 2001a, 2002), foxes are more numerous in habitats with dense cover, including chaparral and introduced stands of fennel (Foeniculum vulgare) (G. Roemer, pers. obs.).

This young pup had no fear of people and was exploring right near the visitor center. This brings up the importance of not feeding wildlife, as many Channel Islands animals are given (or steal) food from park visitors.

Yes, it was on Santa Cruz!