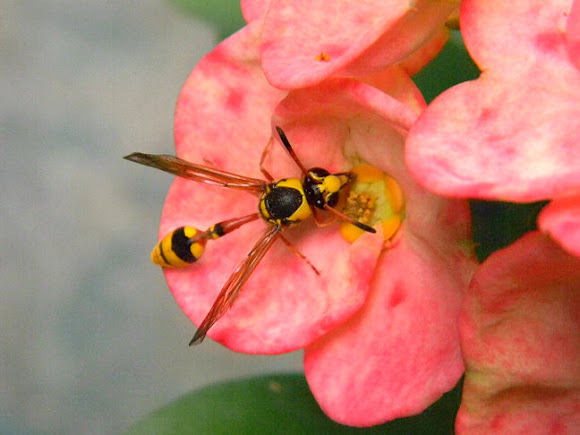 Three or four yellow potter wasps were visiting this flower near sunset. "The yellow potter wasps build jug-shaped mud cells in sheltered locations. The female wasp builds the nest, then collects three to four medium size hairless caterpillars (20-30mm) and puts them inside the nest. Then she lays an egg in the nest. (Or lays eggs first before collecting caterpillars?) The female wasp finds those caterpillars amongst nearby plants, paralyzes them and puts them inside the mud cell. The wasp stings the caterpillars to paralyze them. The egg hatches and the larva feed on those caterpillars. The female wasp lays one egg in each cell before sealing it." Males resemble females but have 5 instead of four yellow abdominal bands. Males do not build or provision the nests.

Spotted on a potted crown-of-thorns plant (Euphorbia milii) outside in a large semi-urban yard & garden next to a disturbed patch of remnant lowland forest.

The wasps were intently visiting these flowers as if seeking nectar however I have found no information on this activity although one photograph in the 3rd reference shows a male wasp on a flower head. Some of this spotting's photographs clearly show 5 yellow abdominal bands and are thus presumably males.

Very nice series! If I look at this enough, I should know a potter wasp from her on in! (: