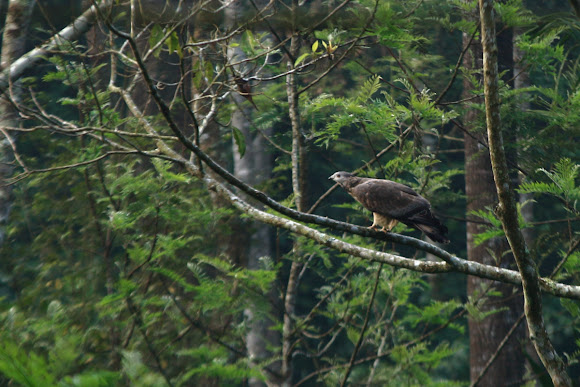 Despite its name, this species is not related to Buteo buzzards, and is taxonomically closer to the kites. It appears long-necked with a small head (resembling that of a pigeon), and soars on flat wings. The head lacks a strong superciliary ridge, giving it a facial appearance very unlike a raptor. It has a long tail and a short head crest. It is brown above, but not as dark as European honey buzzard, and paler below. A dark throat stripe is present. Unusually for a large bird of prey, the sexes can be distinguished. The male has a blue-grey head, while the female's head is brown. She is slightly larger and darker than the male. The male has a black tail with a white band. (From Wikipedia.)

This Oriental Honey Buzzard was seen in a coffee plantation.