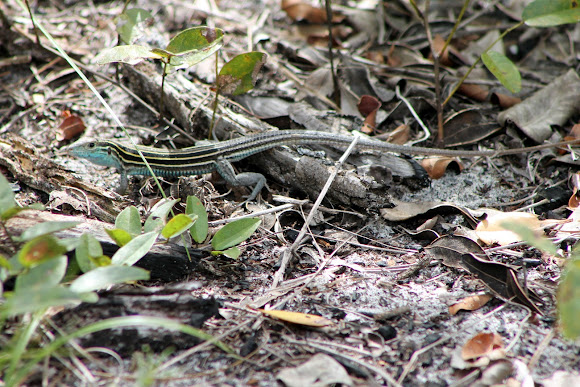 The Six-lined Racerunner is typically dark green, brown or black in color, with six yellow or green-yellow stripes that extend down the body from head to tail. The underside is usually white in color on females, and a pale blue in males. Males also sometimes have a pale green colored throat. They are slender bodied, with a tail nearly twice the body length

Like other species of whiptail lizard, the Six-lined Racerunner is diurnal and insectivorous. They are wary, energetic, and fast moving, with speeds of up to 18mph, darting for cover if approached. Due to its extensive range, it is found in a wide variety of habitats including grasslands, woodlands, open floodplains, or rocky outcroppings. It prefers lower elevations, with dry loamy soils. Breeding takes place in the spring and early summer, with up to six eggs being laid in mid-summer and hatch six to eight weeks later. A second clutch of eggs may be laid several weeks after the first.