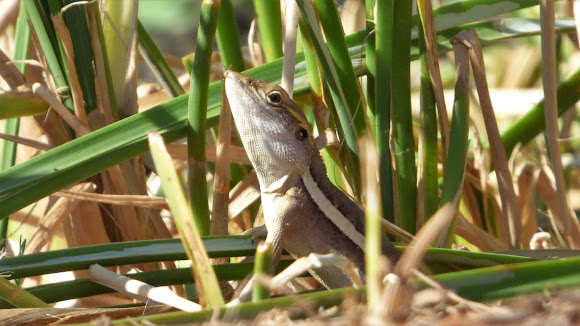 These beautiful Dragons are commonly known as Ta Ta Lizards due to their habit of waving a front limb when it stops running. They have "long, slender, well-developed limbs, rough skin and a long, tapering tail. This species has a small, serrated crest on the back of its neck and along its back. [They are] usually grey to olive brown, reddish-brown or black and has a broad light stripe along each side of its back, which may sometimes be broken into blotches. A light band also runs through the upper and lower lip. Gilbert’s dragon may have some ability to change colour, for example becoming lighter in full sun and darker in shade, which may help it to maintain its body temperature." (Arkive: http://www.arkive.org/gilberts-dragon/lo... )

On the edge of the waste water wetlands.

This little one was filmed chowing down on maggots which were in a dead, rotting Agile Wallaby (Macropus agilis) - check out this little video: https://youtu.be/X1ai5-ChXf8 . It was on the edge near the reeds and rushes. Pics 4 - 6 are of it eating. The first two are actually after eating. It seemed content enough to let me get within a couple of metres of the feasting...fascinating and disgusting all at once. They are incredibly agile and I have seen one jump down from height of about 1 metre (3.25 feet).

Thank you Hema! I'm with you there, these guys are so cool :)

Just updated the video link (in the notes section) because the old one wasn't working.