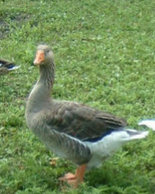 Uses: Utility - meat, especially when crossed with Embden Geese. As a broody although due to their size, can break their eggs. Eggs: 20 to 40 white eggs per year. Origin: France. Weight: Gander: 11.8-13.6Kg. Goose: 9.1-10.9Kg. Colours: Grey, Buff and White Useful to Know: A popular fast growing commercial hybrid is an Embden Gander crossed with Toulouse Geese. Dropped Tongue is common in Toulouse Geese. Photo: A German Toulouse Goose with a smaller keel than British / American exhibition varieties. Toulouse Geese originate from the countryside around the city of Toulouse in Southern France. The French created this incredibly heavy goose to use for 'Pâté de foie gras'. This has been, and still is, a delicacy in France. Forced feeding used in the production of foie gras production is controversial, due to the procedure of forcing a tube down the throat and the health consequences of an enlarged liver. A number of countries now have laws against the sale of foie gras and the force feeding of animals. It was the British and American breeders that increased the size and dewlap of the Toulouse Goose even further. German Toulouse have smaller keels than British Toulouse. The Grey Toulouse Goose (together with the Embden Goose) was one of the first Geese to be standardised in 1865 in the UK. The White version was standardised in 1982 and the Buff in 1997. In France they are called L'oie du Toulouse and in Germany Toulouser Gänse.

The Toulouse goose is found in barnyards or small home flocks. They are well suited to living in a large garden, pasture or orchard. They do require protected shelter at night.

We have one down the road at our park.

Jessica and Lily Mueller 9 years ago

Thank you, but I had to do a lot more homework on this bird and it is not the American Blue. All fixed now.

Spotted by
Jessica and Lily Mueller