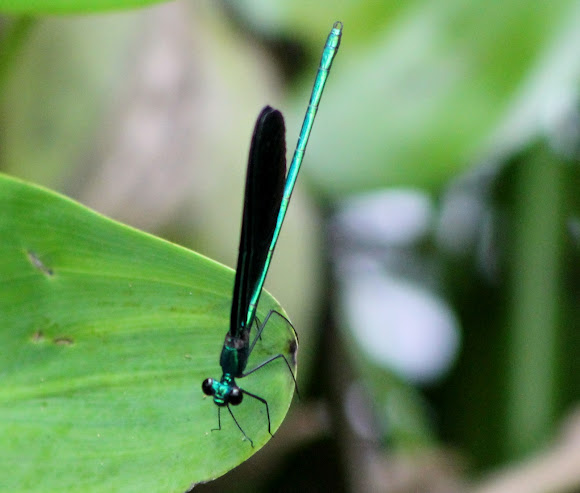 It is between 39–57 mm (1.5–2.2 in). The males have metallic blue-green bodies and black wings. Females have duller brown bodies and smoky wings and glistening white spots near tip wings. Naiad have pale brown bodies with darker markings

It lives near wooded streams and rivers. Ebony Jewelwings flutter like a butterfly. When disturbed they fly a short distance to safety. These damselflies are easy to get close to as long as you approach slowly and don't make any sudden movements. They will often stop to rest on leaves or twigs. Ebony Jewelwings may fly far from water. They can be seen in the middle of the woods, while most damselflies and dragonflies are usually seen near ponds, lakes, or rivers

Thanks , Beautiful Insect for Sure

This color is really interesting for an insect.. good picture!

I saw so many after I spotted this one, very pretty indeed