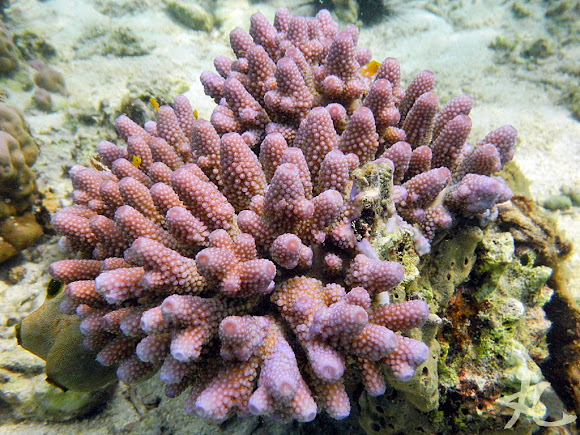 Also known as Stubby Branching Coral, A. humilis coral heads have finger-like branches, up to 3cm thick, arising vertically in clumps or from basal plates. Each branch tapers to a large axial corallite that's about 5mm wide. Radial corallites are about 2mm in diameter and appear in various lengths, have thick lips especially on the lower side. The branches are thick, solid and stunted in the surf zone, where this species is most abundant. Large colonies may cover over an area of about 1sqm. Colonies in deeper waters have longer branches that can reach 10cm long, but rarely more than that. Colonies are corymbose (flat-topped). This species occurs in various colors, but the most common are cream, brown or blue (with paler tips).

This species occurs in shallow, tropical reef environments. It is found on exposed upper reef slopes and reef flats.

Spotted this colony in less than 7m of water at the Marissa 1 dive site, off the western coast of Samal Island, Philippines. It was a joy to see this coral in such a rare color form -- usually they're brown here. It was less than half a meter wide.