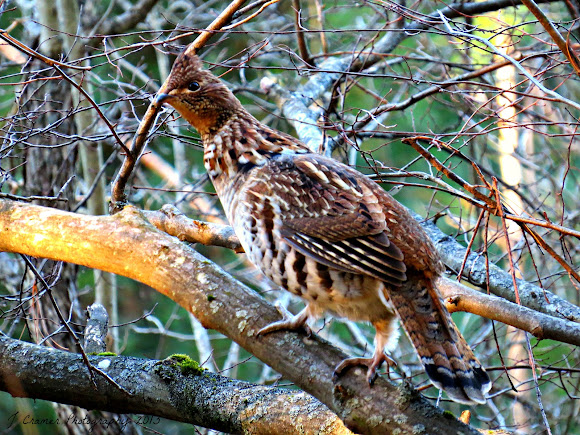 hese chunky, medium-sized birds weigh from 450–750 g (0.99–1.7 lb), measure from 40 to 50 cm (16 to 20 in) in length and span 50–64 cm (20–25 in) across their short, strong wings.[3] Ruffed Grouse have two distinct morphs, grey and brown. In the grey morph, the head, neck and back are grey-brown; the breast is light with barring. There is much white on the underside and flanks, and overall the birds have a variegated appearance; the throat is often distinctly lighter. The tail is essentially the same brownish grey, with regular barring and a broad black band near the end ("subterminal"). Brown-morph birds have tails of the same color and pattern, but the rest of the plumage is much more brown, giving the appearance of a more uniform bird with less light plumage below and a conspicuously grey tail. There are all sorts of intergrades between the most typical morphs; warmer and more humid conditions favor browner birds in general. The ruffs are on the sides of the neck in both genders. They also have a crest on top of their head, which sometimes lies flat. Both genders are similarly marked and sized, making them difficult to tell apart, even in hand. The female often has a broken subterminal tail band, while males tend to have unbroken tail bands, though the opposite of either can occur. Females may also do a display similar to the male. Another fairly accurate sign is that rump feathers with a single white dot indicate a female; rump feathers with more than one white dot indicate a male.

Like most grouse, they spend most of their time on the ground, mixed woodland rich in aspen seems to be particularly well-liked. These birds forage on the ground or in trees. They are omnivores, eating buds, leaves, berries, seeds, and insects. According to Nature writer Don L. Johnson: "More than any other characteristic, it is the ruffed grouse's ability to thrive on a wide range of foods that has allowed it to adapt to such a wide and varied range of habitat on this continent. A complete menu of grouse fare might itself fill a book. One grouse crop yielded a live salamander in a salad of watercress. Another contained a small snake."[4]