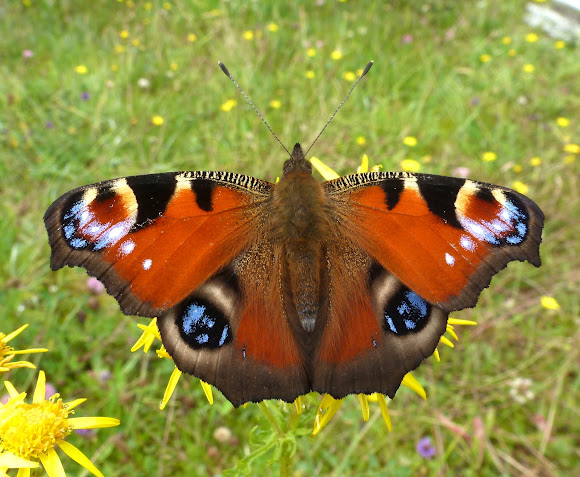 The European Peacock (Inachis io), more commonly known simply as the Peacock butterfly, is a colourful butterfly, found in Europe and temperate Asia as far east as Japan. Classified as the only member of the genus Inachis (the name is derived from Greek mythology, meaning Io, the daughter of Inachus). It should not be confused or classified with the "American peacocks" in the genus Anartia; these are not close relatives of the Eurasian species. The Peacock butterfly is resident in much of its range, often wintering in buildings or trees. It therefore often appears quite early in spring. The Peacock butterfly has figured in research where the role of eye-spots as anti-predator mechanism has been investigated. In the British Isles, the butterfly is found in England, Scotland (including Orkney and Shetland), Wales, and Ireland. The Peacock is expanding its range. The butterfly has a wingspan of 50 to 55 mm. The base-colour of the wings is a rusty red, and at each wingtip it bears a distinctive, black, blue and yellow eye-spot. The underside is a cryptically coloured dark-brown or black.

The Peacock can be found in woods, fields, meadows, pastures, parks, and gardens, and from lowlands up to 2,500 metres (8,200 ft) elevation. It is a relatively common butterfly seen in many European parks and gardens. The Peacock male exhibits territorial behaviour, in many cases territories being selected en route of the females to oviposition sites

Io is a figure in Greek mythology. She was a priestess of Hera in Argos. Aglais io and Inachis io are the same. Aglais io the correct scientific name in use today.

Yes, I would:
http://www.faunaeur.org/full_results.php...
You may add it as a tag and add it in the info section.

So bauycca, should I correct this ID to Aglais io?

thanks Nuwan for the ID, and also tmvdh...

Awesome photos! That butterfly is beautiful!

Beautiful photos, pamsai! This is a peacock butterfly, and your photos show it off in all its stunning glory!!