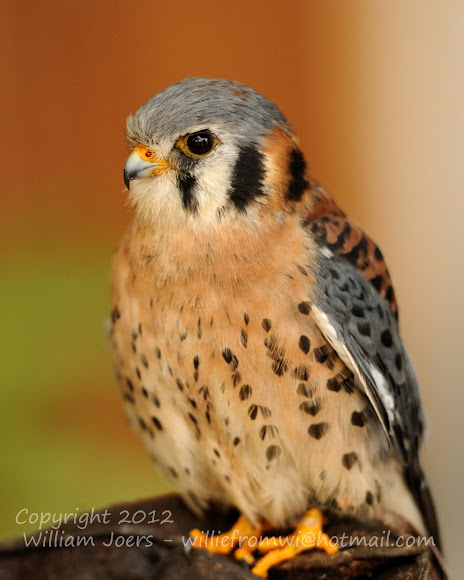 The American Kestrel is sometimes known as the Sparrow Hawk. It is a small falcon, and the only kestrel found in the Americas. It is the most common falcon in North America, and is found in a variety of habitats. At 19–21 centimeters (7–8 in) long, it is also the smallest falcon in North America. This is an 11 year old male. He is a rescue bird, and is used as a teaching bird by Ray at Flight of the Raptor.

This bird is a captive bird and is used to teach both the young and the old the importance of Raptors in our world, and their abilities.

Thank you so very much for taking the time to look at several of my spottings Petricecat. I am thrilled you enjoy my efforts to capture the beauty I see in creation.

GoncaloFerreira, this bird is a part of a falconer.s educational show. It flies freely several times a day and hunts for its own prey almost exclusively. In the notes I have clearly stated this, I am sorry you missed it. or could not easily read it. I wish I could post my information in the native tongue of each person who views my spottings.

Javed Hersch, My spottings unless I say so are all of wild and free birds and animals. This one is used in a Falconer's educational show. It is clearly stated in my notes. The second photo clearly shows a gloved hand of this birds handler.

Brilliant spotting and great series of photos, was this taken in the wild?

Beautiful photos! I think it's interesting he's only 7 to 8 inches long.

a very belated thank you LyndseyD for your kind words.

What a cutie! Great shots as usual!

Great shots!
I love them.

Thank you so very much Renanulisses

Maria, I do not personally know the man who runs these shows, because I was interested in his birds he allowed me more time then most to talk to him. If I go back down there, and I see him, I will have to ask more about why this bird is still captive. He uses all his birds to teach in mostly outdoor settings. This bird was in terrible shape when he got it, and he has had it for over 11 years. I only spoke with the man who runs Flight of the Raptor for a short time and can not provide you with the answer. I do hope to make it down to the area once more in the nest few weeks, if I do and have time I will ask and post it here for you or leave you a message via facebook. Most of his birds fly and are used in his outdoor presentations, this one never flew. I am not certain if it was because of lack of time in his program, or because it is unable.

Why is it captive? Was it injured and could not be released?

Thanks Nexttogone, Malcolm, Karen and Nuwan. Malcolm, one of the things I have found simply interesting is the fact that in some parts of the world animals birds or plants are called by names I have never heard them called. Very interesting, indeed.

Interesting to note that in the USA this is known as a Sparrow Hawk. In Europe the Kestrels come under Falco while the Sparrowhawk (One word in English) is an Accipiter. The many differences in common names can often cause confusion hence the need to use scientific names for a more accurate ID.