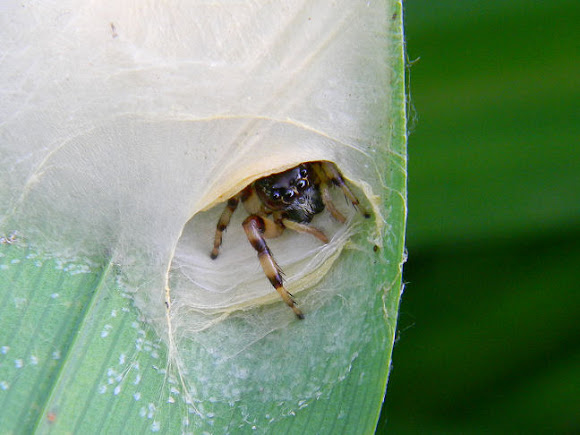 This is a jumping spider in its reproductive web. "Like all true spiders, the jumping spiders do create silk, but not for web making. Instead, they use the silk to line their places of refuge to make them more comfortable, they use the silk to create a covering for their cluster of eggs, and they also commonly string a line of silk behind them as they roam about on walls or patios. It is thought that this line of silk serves as a "drag-line" enabling the spider to stop its fall should it fall or leap off a surface. It then could pull its way back up the line of silk to return [to their original position, to make another attempt on a prey item or] to avoid falling all the way to the ground below, where various unknown dangers could be lurking." ( http://buginfo.com/article.cfm?id=92 ) "The jumping spider family (Salticidae) contains more than 500 described genera and about 5,000 described species, making it the largest family of spiders with about 13% of all species. Jumping spiders have some of the best vision among invertebrates and use it in courtship, hunting, and navigation. Though they normally move quietly and fairly slowly, most species are capable of very agile jumps, notably when hunting, but sometimes in response to sudden threats. Both their book lungs and the tracheal system are well-developed, and they use both systems (bimodal breathing). Jumping spiders are generally recognized by their eye pattern. All jumping spiders have four pairs of eyes with particularly large anterior median eyes." ( http://en.wikipedia.org/wiki/Jumping_spi... )

Observed on Pandanus amaryllifolius in a large semi-urban yard & garden next to a disturbed patch of remnant lowland forest.

Very interesting information and photo. Thanks for sharing!

Thanks very much, Mayra!

Thank you Jolly, Smith'sZoo, & Sergio! I had to wait about 3-4 minutes each time she got scared and retreated inside. She lost the staring contests ;-)

Excellent, Scott. I've seen more than a dozen different species of jumpies in my area, and I never saw a tent built with silk, only. Spiders here usually use the silk for joining two leaves, creating a more solid cover. Congratulations.

Brilliant! did you wait long for jumper to peep out?

This series of the spider with its web is very cool!