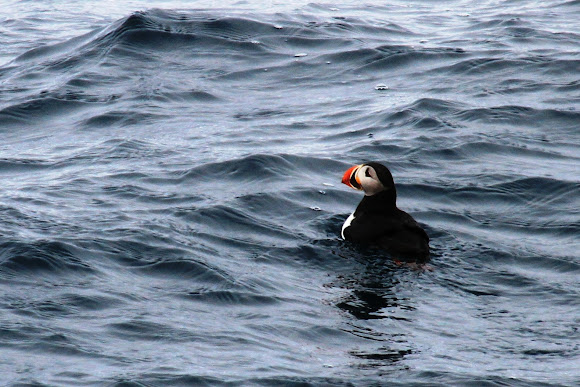 I would argue that the Atlantic Puffin is the most easily recognisable bird of all the alcids. With their cartoon-like appearance they are also a favoured object amongst wildlife photographers. There are no distinguishable feautures between male and females (aside from size, where the male is larger). Both have black top sides (including wings) and white undersides. The bill is large and triangular with distinctive orange, blue and white bands. They also have a white diamond shaped patch in the face.

Strictly marine species, found in the northern Atlantic where they breed in huge colonies on rocky cliffs.

Popularly referred to as the 'clown of the sea' or 'parrot of the sea'. Not the most graceful of birds in flight as can be seen in picture number two.

Thank you very much - you are lucky to have the Tufted Puffin in your neighbourhood LivesInADream!

Now I am the one that is jealous! Nice spotting!!

Thanks both! Same here Marta!! Next year I want to go to Farne island and photograph the bird mountains.. Looks amazing..

This is one of my holy grail spottings! Nice job!