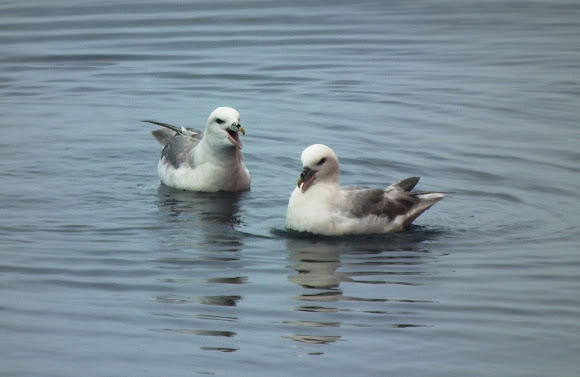 Medium-sized seabird, looks similar to a gull but belongs to the same family as albatrosses and petrels. In general, they are white with grey wings and back, but a pale and a very dark colour morph exist. I also noticed that the grey could sometimes be more brownish, and sometimes almost blue. The two individuals in this picture were squabbling. The video shows a flock of about 50 fulmars that followed our ship during a force 8 storm in the Iceland Basin.

We found these everywhere. They are truly sea-faring birds, and we found them even when we were very far from land. We also found them in the sea ice (their traditional range says "sub-Arctic", but I can vouch that they go more northern than that!).

The video shows the moment a huge flock of fulmars appeared during a storm and followed us. They fly deftly around the waves, it was amazing to watch. I apologise for how shaky the video is, the ship was moving a LOT and it was taking all my concentration just to stay standing up. The sound of the storm was phenomenal, and I don't think this video does it justice. Hope you enjoy it though!

Thanks Jeannette and Ava! I had a fun time staying upright, that's for sure :D

OMG! Were you strapped to the mast?! The video is great.

Thanks guys! Malcolm, we experienced a huge storm in the Bay of Biscay last year, too, it's apparently quite a rough place. Though waves breaking 8 decks up must have meant one heck of a storm!!

That is one incredible video Laura. It's one thing to fly in the mountains, but when they are moving about like that...I have been in a storm like that in the Bay of Biscay in a ferry when the waves were breaking over the bridge - 8 decks up!

nice spotting and the video is a nice addition, too!