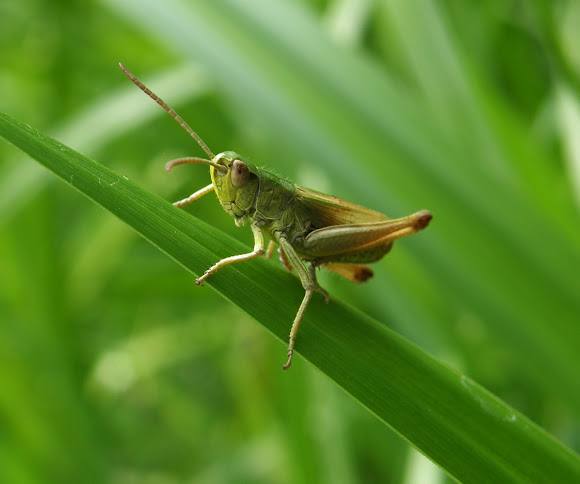 Females grow to approximately 2 cm and are larger and less active than males that grow to approximately 1.5 cm. Both sexes are flightless. In females the wing cases (covering vestigial wings) extend only a short way down the abdomen while males have longer wing cases extending to almost the tip of the abdomen. They can be variable in colour with green, brownish, purple-red and pink forms recorded, although green forms are most common. Colour forms are genetically determined and some populations can show high frequency of pink grasshoppers. Chorthippus parallelus is told from similar species by the approximately parallel nature of the bars (pronotal side-keels) on the back of the neck which gives the species its name.

Found in non-arid grasslands throughout the well vegetated areas of Europe and some adjoining areas of Asia.The range of the Meadow Grasshopper extends from the Atlantic coast of Europe to the Urals. It is found from Scandinavia in the north to southern Spain and Anatolia in the south. It prefers moist vegetation and in southern regions is typically found in river valleys and at altitude (up to approx 2000m), not being found in arid areas.

First pics are juveniles or males. Last is an adult female.