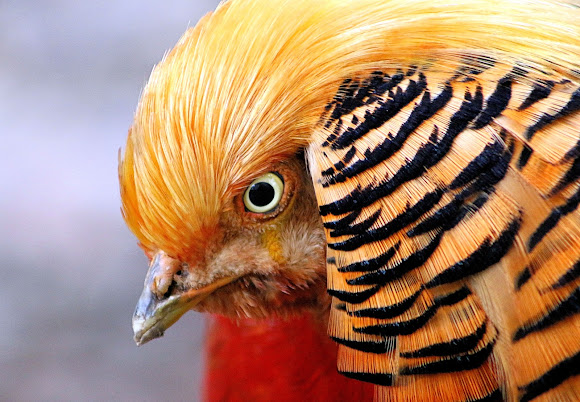 The adult male is 90–105 cm in length, its tail accounting for two-thirds of the total length. It is unmistakable with its golden crest and rump and bright red body. The deep orange "cape" can be spread in display, appearing as an alternating black and orange fan that covers all of the face except its bright yellow eye with a pinpoint black pupil. The face, throat, chin, and the sides of neck are rusty tan. The wattles and orbital skin are both yellow in colour, and the ruff or cape is light orange. The upper back is green and the rest of the back and rump is golden-yellow. The tertiaries are blue whereas the scapulars are dark red. Other characteristics of the male plumage are the central tail feathers, black spotted with cinnamon, as well as the tip of the tail being a cinnamon buff. The upper tail coverts are the same colour as the central tail feathers. The male also has a scarlet breast, and scarlet and light chestnut flanks and underparts. Lower legs and feet are a dull yellow.The female (hen) is much less showy, with a duller mottled brown plumage similar to that of the female Common Pheasant. She is darker and more slender than the hen of that species, with a proportionately longer tail (half her 60–80 cm length). The female's breast and sides are barred buff and blackish brown, and the abdomen is plain buff. She has a buff face and throat. Some abnormal females may later in their lifetime get some male plumage. Lower legs and feet are a dull yellow. Both males and females have yellow legs and yellow bills.

Spotted at the Tamworth Marsupial Park.

Thanks a lot james, Mona and Joel! I was pretty surprised to we him in a nsw country town marsupial park!

Truly magnificent and elegant. I am so jealous I do not get to see that around here....great job

Thanks Wild things!! It's one of my favourites from my collection

Thanks Chloesm1!! He was gorgeous!

Makes you wonder if they have them in Egypt too!

Australia too, I'd say they'd domesticated all over the world by now

These are introduced in the USA.

I wouldn't be surprised, even the gold and black barring is the same. Do you think they had some in Egypt back then or maybe someone brought the design with them?

I bet you that the pharoahs got the idea of costumes from these birds.

Thank you Sarah! I wish I could have a pair they're so beautiful!

sarah in the woods 9 years ago

Beautiful photographs. These birds have a special place on my heart, because my grampa gave me a pair when I was a kid.

I wonder what it is that makes the first birds crest so much larger than the second's? Age perhaps or something else?

He does doesn't he Jemma?! I didn't think of that at the time. Good luck finding those things in tamworth though! He needs to be in Egypt

looks like an Egyptian pharoah. Now all we need is pyramids and camels .

What a beauty Alice.

Thanks sintija! He was gorgeous!

Thanks biswajit!! This guy isn't a native to Australia, they're originally from western china but I spotted him in a small marsupial park here in Australia.

Is there some kind of pheasant mission I can add this one to?