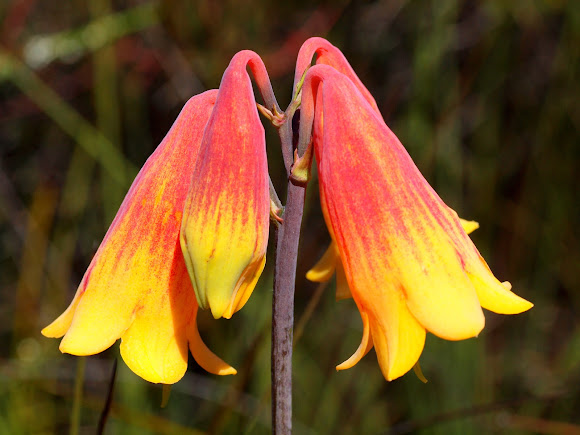 Blandfordia grandiflora (Christmas Bells) is an iconic heath species that is classified as ‘endangered’ under the Queensland Nature Conservation Act 1992. This species was previously more common and was harvested intensively for the wildflower trade. Christmas Bells are an erect perennial herb that flowers from December through to March for 1-2 seasons after fire and when flowering they are both conspicuous and beautiful. The perianth of the flower is most often red with yellow semi-circular lobes, although significant variation has been observed and it appears that the 'traditional' form of Christmas Bells may have been so heavily harvested that it is now more common to encounter flowers that are mostly yellow in colour. Christmas Bells are endemic to Queensland and New South Wales coastal heathlands where they are restricted to wet, sandy or peaty soils. Their original distribution has become greatly reduced from land usage change, clearing and harvesting.