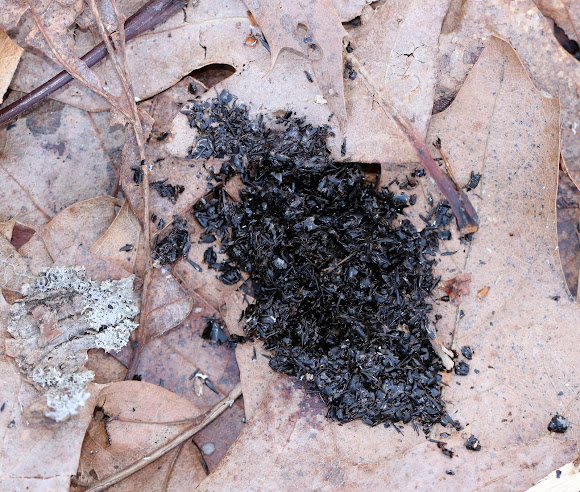 This scat consisted of a small pile of bits of insect exoskeletons!

Pileated Woodpeckers eat ants, primarily carpenter ants, during the winter. They usually defecate frequently during the day at their foraging sites.

Spotted on the ground in a mostly deciduous forest with lots of woodpecker sign.

Similar to humans, birds excrete metabolic waste products (mainly nitrogen), which remains after food is broken down. Humans excrete nitrogen as urea in urine, which is diluted with water. However, birds need to be as light as possible for efficient flight, so they can't have heavy, water-filled bladders. Instead, they excrete nitrogen as a chemical called uric acid in an undiluted, concentrated form. The white outer coating of bird droppings is the uric acid. The inside of the droppings are the actual feces, or the indigestible parts of a bird’s diet. A Pileated Woodpecker’s droppings during winter consist of bits of carpenter ant exoskeletons and wood fiber. Birds simultaneously evacuate uric acid and feces from an opening just under the tail called the cloaca.

Awesome. Glad it helped you Brian!

Thanks for posting this one Christine. I took a picture of the same thing but couldn't figure out what it was. I wanted it to be a fungus or lichen but of course could never find a match and it is on top of deciduous leaves like yours.